Quite some time ago (about late 2007) I saw this documentary called "21 Up Japan" which is similar to the "Up Series". The idea of the documentary is the follow a group of children from when they were 7 years old, and then every 7 years they go back to them and see how they are going. The interviewers had a set of semi-structured questions which they asked, and it was very interesting to see how everyone's answers changed from when they were 7, 14, and 21. 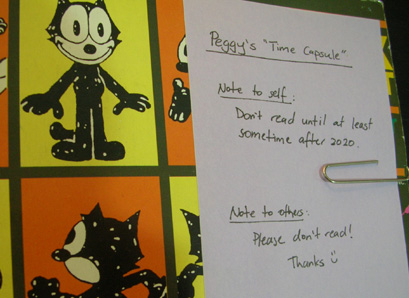 After seeing this documentary I decided I wanted to do something similar - make my own time capsule :) However it wasn't until a few months later in early 2008 when I found an old exercise book which had some short stories that I had written in 1995 that really got me started. Reading those stories made me realise how much can change in a few years (and how much we can forget!). My time capsule is bit different to 21 Up Japan- it does have a set of questions which I plan on answering once every year or so, but the majority of entries are more diary-like entries of times when I feel like something important has happened.

I've only just started my time capsule, so still quite new to all of it - if anyone has any tips please share them :) Here are some of my tips/thoughts on how to create a time capsule:

Even though I said to use pen/paper for the your time capsule, it's still ok to keep a few electronic ones - this blog for example is a good example - in fact I was reading my old blog the other day and found it very amusing! I've also subscribed to Photojojo's Time Capsule - it takes photos from your flickr from a year ago and emails them to you. Only recently started using flickr (because of the time capsule actually), but I would imagine this would work quite well if you're a heavy flickr user.

Just to finish off, this is a great example of how amazing a time capsule can be!