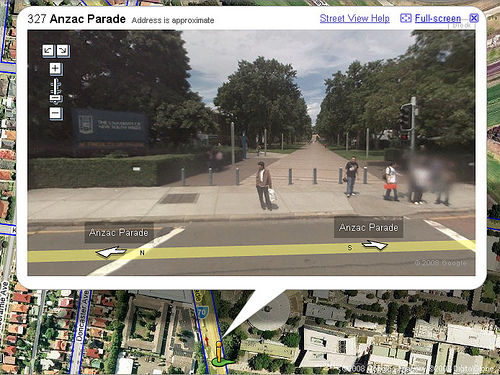 When Google Maps was released in early 2005 it was quite cool to be able to see a birds-eye view of various places (even if you could only zoom in so far). Since then, there has been many improvements - more view types, clearer pictures, closer zoom etc.

In mid 2007, a new view type: Street View was made available. I must say, it is quite cool - Street View allows you to actually see the street as if you were there at the place. This view was only available to a selection of cities in the USA and Australia (the 'birth' place of Google Maps) was left out...until today!

Yes, as of today (5th August 2008) there is Street View in Google Maps for pretty much all of Australia! At first I was quite excited, as I've had a look at Street View in USA before (1 Infinite Loop :) ) and thought "Wouldn't it be cool if this was in Australia?". Now that it is in Australia I must say it is cool, but definitely also scary! In my opinion, being able to see your own house on Google Maps and with the correct (or a very close) address feels scary!

Though having said that it is definitely very cool! After spending quite some time just randomly looking at places, I begin to wonder how long it took them to 'capture' all the streets in Australia. Not only that, also how they could capture such great photos by driving a van around the streets.

Now that I'm slightly over the 'excitement' of Street View in Australia, I wonder if it is a good or bad thing that there is Street View? There has definitely been a lot of controversy with privacy that surrounds Street View (and now that I can see places I recognise it really 'hits home'). In my opinion, it is actually good - since if someone does have your address, and they are in your neighbourhood they can always just look at the Refidex and locate you; I guess with Street View it means people can 'preview' what they will see before they physically go there. It'd be interesting to know what others think.