As you may have guessed from the title, this post is going to be a rant/complaint about the absurd fees we need to pay to use the Sydney Airport Link.

Firstly, a couple of quick facts:

Fact #1 is probably not surprising at all - Sydney is Australia's largest city so Sydney Airport being the busiest Airport in Australia is in my opinion expected.

On the other hand Facts #2-#6 may raise a few eyebrows. $15+ to travel from the airport to Sydney CBD on a train that does not accommodate for your luggage? Looking for another form of public transport to the city - none exists. Need somewhere to put your luggage when travelling? Don't think about public transport at all - get a taxi or private coach.

Maybe it's just me, but that doesn't sound very inviting at all. Definitely not a very good first impression of Sydney for first time visitors. Though, having lived in Sydney for a few years now, I've come to accept how troublesome and absurd it is to travel to Sydney Airport. 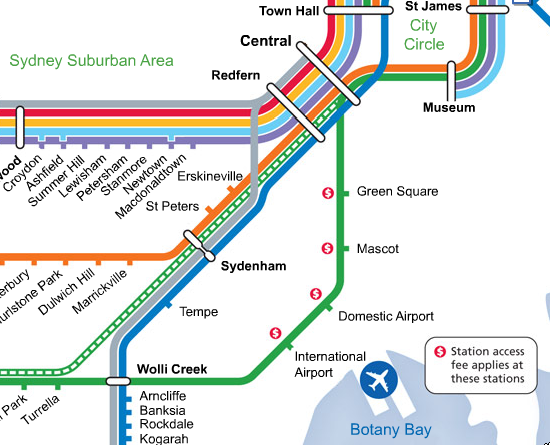 Let's have a look at the cost first. To travel roughly the same distance by train on the Sydney rail network it will cost you $3.60 (Central to Wollstonecraft, 8.34km). Yes, you read correctly $3.60 - a difference of roughly $11.40 or $11.80. The reason is there are four stations along the Airport and East Hills Line (solid green line in above image) - Green Square, Mascot, Domestic Airport, International Airport - that are not owned by the government, instead they are owned by the private company Airport Link Pty Ltd.

So the railway line itself is owned by Sydney's RailCorp, while the stations/gates are owned by a private company, therefore as a commuter you have to pay a $11.80 gate fee to pass through the gates of the Domestic or International stations. If you think the gate fee is rather steep given a $3.60 journey, I whole heartedly agree with you.

This begs the question - why? Why does a private company "randomly" own four stations on a public railway system? Why is the gate fee so ridiculous? Answer: NSW Government. I don't know the full details, but this is my understanding (main source: Wikipedia).

This all sounds good until you realise that the NSW Government was overly optimistic and over estimated passenger numbers and train reliability. The inability for the NSW Government to correctly estimate these key factors in the agreement led to:

There is quite a bit more detail to the entire promise of passenger numbers etc, but basically NSW Government stuffed up. In order to try and fix this stuff up, they crippled transport to and from Sydney Airport.

Whilst writing this blog post, I came across this article from ABC News: Sydney Airport slams "absurd" transport links. The news article echoes a similar message to this post, but I would like to point out the end of the article which shocked me when I read it.

"People get horrified when they go to the local railway station and say how much to the airport and they say '$13.'"

But the chief executive of Airport Link, Tim Anderson, has rejected claims that it is too expensive.