Unless you've been living under a rock, chances are you've heard of 2048, a simple game where you slide to merge tiles of the same number and aim to get the elusive 2048 tile.

Despite it's simplicity, 2048 a very addictive game, and on Friday night I suddenly had an idea for a twist:

With this idea in mind, my weekend plans went out the window and most of it was spent prototyping the idea which would eventually be called connect three. 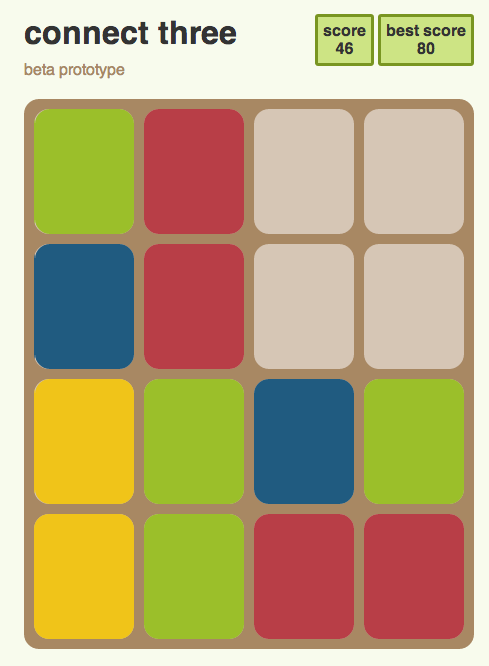 The easy path would've been to fork 2048 and make tweaks here and there, but that wouldn't be half as fun. So instead, decided to start from scratch!

Overall it wasn't as hard as I thought it would be - the CSS probably took nearly as much time as the logic/controls etc in JavaScript!

The game still needs quite a bit of polish. The first few things that came to mind (I'm sure there's more!)

Overall, quite happy with the result :)

Head over to http://dx3.psychopyko.com/connect-three/ to give it a go!

Edit: Not long after this blog, I was pointed to this blog post by Asher, one of the creators of Threes.

The blog post is essentially about all the thought and hardwork they took to come up with the final product and the various clones/rip-offs of Threes (which includes 2048).

Making Connect Three was probably more a learning process than anything (like most of my games actually), though I purposefully avoided numbers and merging to try and be different.

Lastly, I have said it is a 2048 inspired game simply because I haven't actually played Threes. Purchased and installed on my phone, but the game fails to load... time for a new phone!