Was going to post this up last week, but then saw the free penguin/tux and I just had to post that first :) Anyway, this is the first of hopefully many cool optical illusions that I will post up. I love optical illusions, and I'm going to try and post up "rare" illusions on my blog - so stay tuned!

In my opinion, this illusion is extra cool because nothing was done deliberately to get the illusion effect. The photo was actually taken by Marty, and every now and then it appears on her laptop slideshow screensaver (everytime it appears I point at it and go psycho :) ) 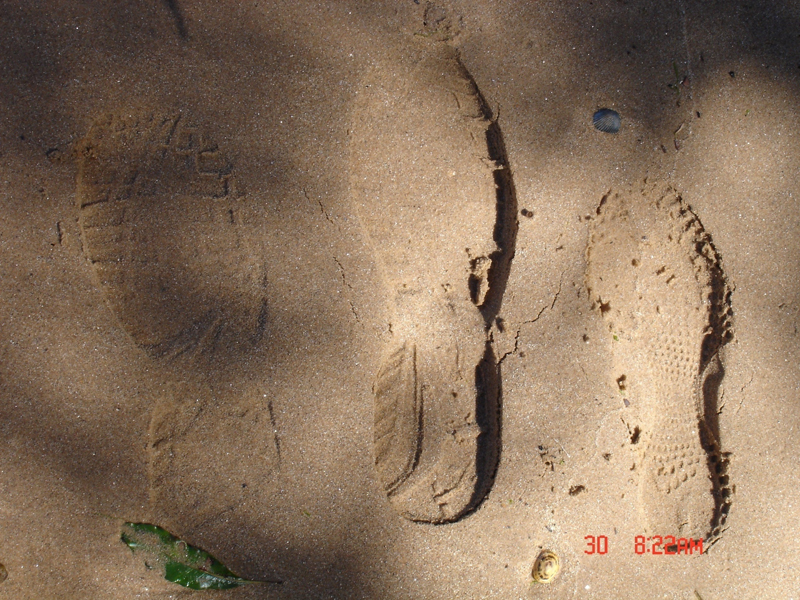 The illusion reminds me of something I read ages ago on the Internet - someone had saw footprints on the sand, but instead of being imprints, they were coming out from the ground...like if people were walking on the other side of the ground. I vaguely remember seeing a photo of the "inverted footprints" and thinking 'Wow, how is that possible? If it was photoshopped whoever did it must be really skilled!'

However, I know better now...it is in fact an optical illusion! Try this - save the image and rotate it 90 degrees counter-clockwise...the shoe prints should now appear normal. If I'm not mistaken (from my very limited knowledge from one session of psychology), the reason the the illusion we see this illusion is because the way our brain works.

As humans, we are accustomed to light coming from above us, probably because the main source of light is the sun. Therefore, our brains are wired to automatically calculate if things bulge out or cave in depending on the shadows. I think that is why when you rotate the photo (and therefore changing the location of the shadow) the shoe print flips back and forth. As with most optical illusions of this kind you can force yourself to flip between the two states.

Oh, and the other cool thing (also from psychology) is if you didn't bother to save the image and rotate it, but instead just tilted your head it would probably look more or less the same as the upright image. Again, because our brain automatically goes "you're tilted, so the world is tilted, let's un-tilt what we are seeing now". Same concept as when you just wake up and see your clock/door/room - you don't freak out and think your room has turned on it's side, in fact it seems rather upright. Amazing isn't it!